The Class Photo that Broke a Mother’s Heart

What is wrong with this picture? 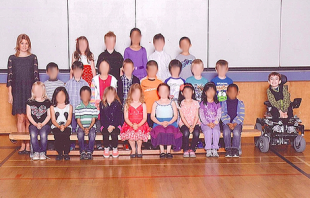 It's one of those things that you don't get, until you get it. Unless you are eternally empathetic, you look at this photo and don't see much wrong at all.

To Anne Belanger, mother of Miles, the photo is unbearable to look at.

When the class portrait for her son's Grade 2 class came home, she opened it excitedly, and immediately shoved it back in the envelope. She couldn't look at it. It broke her heart.
Anne's son, Miles, has Spinal Muscular Atrophy. At the age of 13 months, his parents were told that Miles would never walk, he has spent his life in a wheelchair.
Miles knows he's different than the rest of the kids, but he still tries to fit in. So there he is, on the far side of the image, neck craning as far as he can to stretch into the frame with the rest of his friends. He's beaming. It's school picture day and he's thrilled.
But the photo still broke Anne's heart. The photo was a clear example of how set apart her son is from society. Instead of a big group hug photo with Miles at the center, and classmates and teachers all around, a fully inclusive image, he was stuffed off to the side, some 3 feet away. An after thought, it seems.
It's one of those things that you don't get, until you get it.
The photographer was probably shooting hundreds of students that day, they have a template of how to shoot a class photo. Everyone lines up on the benches, and faces forward. They put the wheelchair as close as possible, and took the picture. Then the next class rolled in, and the routine likely continued all day with nobody thinking anything was wrong.
Anne approached the photography studio, and at first nobody saw it as an issue, or tried to explain it away. After repeated attempts at reconciliation, the studio agreed to come back and retake the photo this week. Miles was taken out of his chair and placed on a bench with a caregiver at his side to give him balance. He beamed again.
It's one of those things that you don't get, until you get it. We want our kids to be empathetic, caring, and observant of the needs of others. It's a lesson many adults could well learn themselves.
FOOTNOTE: As you can expect with a sensational headline like this, Miles' story has gone viral. Miles' dad, Don Ambridge, wants everyone to know that the school is not to be blamed for this issue. "I just want folks to know the school reacted very quickly and compassionately," he told me.
The photographer, once they had the situation fully explained, also made efforts to right the wrong. "[It's a] general lack of understanding," Ambridge said. "Has to change, but no malicious intent in my view."
This is a case of awareness, of walking a mile in someone's shoes or, perhaps, sitting a few minutes in someone's chair.
via The Edmonton Journal
Image via Don Ambridge, used with permission.
Posted by Unknown at 6:39 AM

“A Child Lost in Flight : Moving on after tragedy on Flight 229” is a motivational real-life story.
Incidents on aircraft are rare, but some can be fatal. The eBook is a first person account of a father coming to grips with the sudden, accidental death of his child on an international flight.
It is ultimately about human triumph over tragedy.

A child lost in flight

I would be honored if you would review my book. It is available free for Kindle owners to borrow.
I can also mail out a PDF copy for review if you wish (email adityamohan@ymail.com)